What can you expect from a mathematical theory developed by someone who did not understand mathematics?

Princeton is a madhouse and Einstein is completely cuckoo. (Robert Oppenheimer January 1935)

How are we going to choose between fact and fiction, between science, pseudo-science and nonsense in the flood of information overwhelming us every day? Well, use your brains! What else?

Let’s test this approach on the foundation of modern physics: Nobody Understands, Nobody Even Claims to Understand

But relativity theory is very difficult, you say,  and my brains are not sharp enough to make it possible to say anything sensible about this subject. Don’t panic, you are in good company, because not even expert physicists claim to understand: 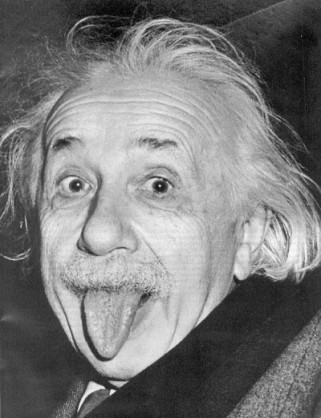 I don’t understand. Do you?

OK fine, nobody understands relativity, not even Einstein, but how are we then going to judge? There are two possibilities:
(A) or (B)? To seek an answer, let us take a look at the inventor Einstein himself. Maybe he can give a clue. Like most of us, Einstein had difficulties with mathematics:
You can find further inspiration on Einstein: Stupid, Unhappy and Lonely.

Can Mathematics Really Do Wonders?

So Einstein did not understand mathematics, but like most people sharing this experience, Einstein had a very high opinion of the value of mathematics:

(A) or (B)? Maybe Einstein himself gave us a clue:

In any case the Swedish Nobel Committee was not convinced:

This is the only Prize motivation expressing explicitely for which contribution the Prize is NOT awarded: Relativity!

If you feel you want more information, take a look at Many-Minds Relativity and Mathematics = Magics?

You may also ask a physicist/mathematician if he/she really understands relativity theory, and not just pretends to understand. For example, ask for and explanation of curved spacetime.

You can also ask if the constancy of the speed of light in vacuum is a definition or a physical fact, see Is One Dollar = One Euro.

After this, you might be ready for a conclusion, which you are wellcome to post below. (A) or (B)?

Or is it so that we as more or less educated citizens in a more or less democratic society, are not expected to have any opinion, about relativity or other technical matters? Should we simply leave relativity theory to the physicists and technical matters to the specialists, even if they don’t seem to understand, and just pay our tax bills to science and keep quiet?